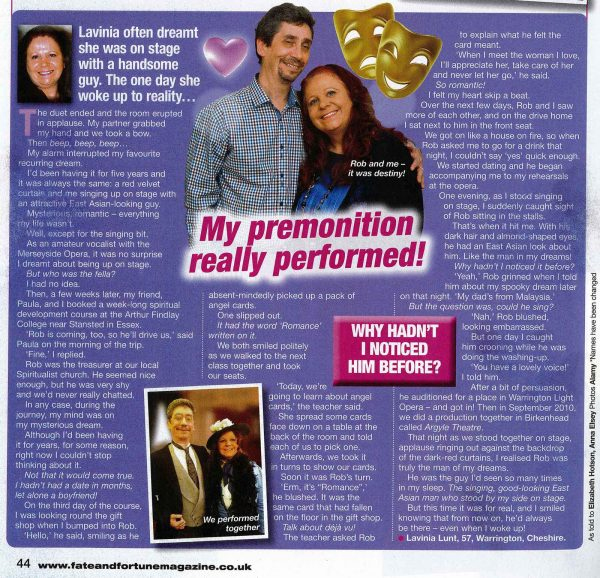 Lavinia often dreamt she was on stage with a handsome guy. Then one day she woke up to reality…
The duet ended and the room erupted in applause. My partner grabbed my hand, and we took a bow. Then beep, beep, beep…

My alarm interrupted my favourite recurring dream. I’d been having it for five years and it was always the the same: a red velvet curtain, and me singing up on stage with an attractive East Asian-looking guy.

Mysterious, romantic – everything my life wasn’t. Well, except for the singing bit.

As amateur vocalist with the Merseyside Opera, it was no surprise I dreamt about being up on stage. But who was the fella? I had no idea.

Then, a few weeks later, my friend, Paula, and I booked a week-long spiritual development course at the Arthur Findlay College near Stansted in Essex.

‘Rob is coming, too, so he’ll drive us,’ said Paula on the morning of the trip,
‘Fine,’ I replied.

Rob was the treasurer at our local Spiritualist church. He seemed nice enough, but he was very shy and we‘d never really chatted.

In any case. during the journey, my mind was on my mysterious dream. Although I’d been having it for years, for some reason, right now i couldn’t stop thinking about it. Not that it would come true. I hadn’t had a date in months, let alone a boyfriend!

On the third day of the course, I was looking round the giftshop when i bumped into Rob.

‘Hello,’ he said, smiling as he absent—mindedly picked up a pack of angel cards. One slipped out. It had the word ‘Romance’ written on it. We both smiled politely as we walked to the next class together and took our seats. ‘Today, we’re going to learn about angel cards,’ the teacher said. She spread some cards face down on a table at the back of the room and told each of us to pick one. Afterwards, we took it in turns to show our cards. Soon it was Rob‘s turn. ‘Erm, it’s “Romance”,’ he blushed. it was the same card that had fallen on the floor in the gift shop. Talk about deja vu! The teacher asked Rob to explain what he felt the card meant.
‘When I meet the woman i love, l’ll appreciate her, take care of her and never let her go,’ he said. So romantic! I felt my heart skip a beat.

Over the next few days, Rob and i saw more of each other, and on the drive home I sat next to him in the front seat. We got on like a house on fire, so when Rob asked me to go for a drink that night, I couldn’t say ‘yes’ quick enough.

We started dating and he began accompanying me to my rehearsals at the opera. One evening, as I stood singing on stage, I suddenly caught sight
of Rob sitting in the stalls. That’s when it hit me. With his dark hair and almond shaped eyes, he had an East Asian look about him. Like the man in my dreams! Why hadn’t I noticed it before? ‘Yeah,’ Rob grinned when I told him about my spooky dream later on that night. ‘My dad’s from Malaysia.’

But the question was, could he sing? ‘Nah,’ Rob blushed, looking embarrassed. But one day l caught him crooning while he was doing the washing up. ‘You have a lovely voice!’ I told him. After a bit of persuasion, he auditioned for a place in Warrington Light Opera and got in! Then in September 2010, we did a. production together in Birkenhead called ‘Argyle Theatre’. That night as we stood together on stage, applause ringing out against the backdrop of the dark red curtains, I realised Rob was truly the man of my dreams. 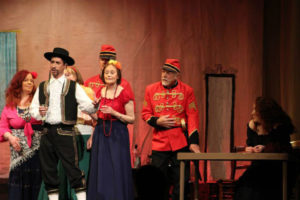 He was the guy l’d seen so many times in my sleep. The Singing, good—looking East Asian man who stood by my side on stage. But this time it was for real, and l smiled knowing that from now on, he’d always be there even when i woke up!